Day 4 and the Final Day of the Ladies County Championship at Trevose Golf Club gave way, at last, to some early season sunshine, and a mild northerly breeze.

Three finals would be contested, and once again Tehidy Park interest would be on that of the Championship Plate, where Katie Sandow would take on Olivia Trewhela of Truro Golf Club.    Olivia would win two of the first three holes to command a two-hole lead, before Katie levelled the match with a birdie on the fourth hole and a par on the difficult stroke one fifth hole.    Halves would follow on the next three holes before Katie edged ahead at the turn with a par 5 on the ninth.

The lead was doubled on the tenth, before Olivia struck a tee shot on the Par 3 eleventh that would hit the pin on the fly, and come to rest 30 feet from the flag, which was duly holed for a birdie 2 ! (Katie 1 up).

With the twelfth hole halved it was Katie’s turn to make a birdie of her own on the Par 5, 13th hole, reducing the 452 yard hole to a drive and a gap wedge ! (Katie 2 up)……….   Olivia was far from finished though, and two solid pars on the next two holes would once again see the match stand at all square on the 16th tee.    When holes 16 & 17 were halved the players would stand on the Par 5, 18th with all to play for.    Both players struck good drives, before Katie hit a 5-wood to the right of the target. Olivia’s second shot came up short of the green, leaving both players with difficult pitch shots. Katie played a superb shot from 60 yards to within 15 feet of the pin, applying the pressure back on Olivia. It was to be telling as Olivia under hit her shot into a greenside bunker, and failed to escape, graciously conceding the hole and match to Katie.

Tehidy Park Ladies section were once again a credit to the club with their unrivalled support, which can’t be underestimated in helping to make a difference to the players competing throughout the week. Today was no exception as they travelled to Trevose in force, and were accompanied by the Club Captain, Mike Eddy in their support of Katie. 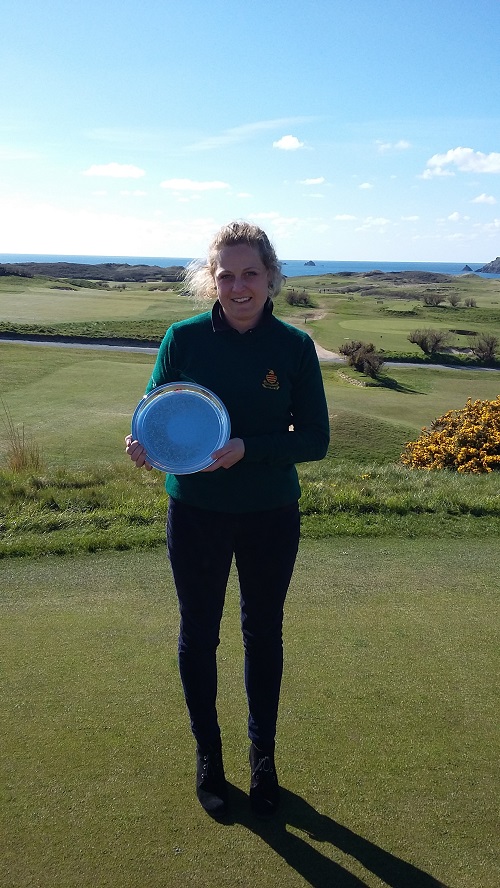 Katie with the Championship Plate