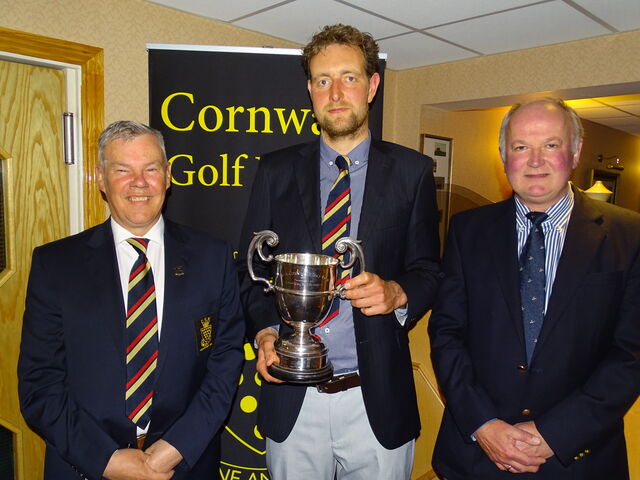 On a day where fog caused suspension of play with the first round almost complete, Rob MacGregor (Tehidy Park) retained the title of Cornish Closed Championship winner at Mullion Golf Club yesterday, recording two near perfect rounds of 70 and 71 for a 1 over par total of 141, pipping runner up and 2014 County Champion Matt Richards (West Cornwall 71 +71) by the one shot. Considering the prevailing weather and a considerable delay MacGregor took all in his giant stride and was delighted to retain the Trophy he won in 2015 at Perranporth.

MacGregor said, “I am obviously really pleased to win this again. I wanted to retain it and was nervous at the start maybe putting extra pressure on myself but I am really pleased with the way I played. When play was suspended we were about to putt on the 17th.  I was playing with Adam (Curtis) and knew we were tied. I three putted 17 when play resumed and then holed a long putt on the 18th which at that stage I thought would get me into a play off with Adam and the possibility of the event being reduced to one round. Luckily we did get out again after a delay and this time I finished with birdies at my two finishing holes, the 8th and 9th. So yes I am really pleased.”

MacGregor started at a blistering pace in his first round. After a par at the 1st he made four consecutive birdies. A dropped shot at the 6th was cancelled out by a bounce back birdie at the par 3 8th and his front 9 saw him 4 under the card. He was unable to repeat the early surge on the back 9 as four bogeys brought him back to the field and to professional playing partner Adam Curtis (Bude & N Cornwall) as both finished with 70s. 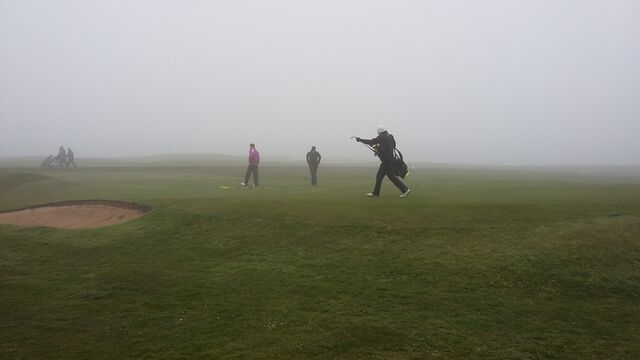 After a murky morning with rain almost throughout the wind dropped and fog moved in across the links forcing CGU officials to suspend play at approx 1.30pm with some second round competitors already out on the course. At that stage the most likely outcome was a reduction to a one round event and the prospect of a play off between MacGregor and Curtis. With minutes to go before the deadline where a second round could not be completed the fog lifted sufficiently to allow the second round to go ahead shortly after 3pm.

Having endured some unpleasant conditions during their first round some competitors chose not to venture out again and this enabled a completion of round two by just after 7.00pm. Second round highlights saw Joe Cruse (St Enodoc) return the only sub par round of the day with a 69 which moved him up into 3rd place overall. West Cornwall’s Phil Weaver returned a level par 70 which meant a 6th place finish for him. Ryan Curtis (Bude & N Cornwall) had a personal highlight as he holed for an ace at the par 3 8th hole. Brother Adam slipped to a 73 to finish 4th and Perranporth’s reigning County Amateur Champion Conor Wilson shot 71 and 73 to finish 5th. 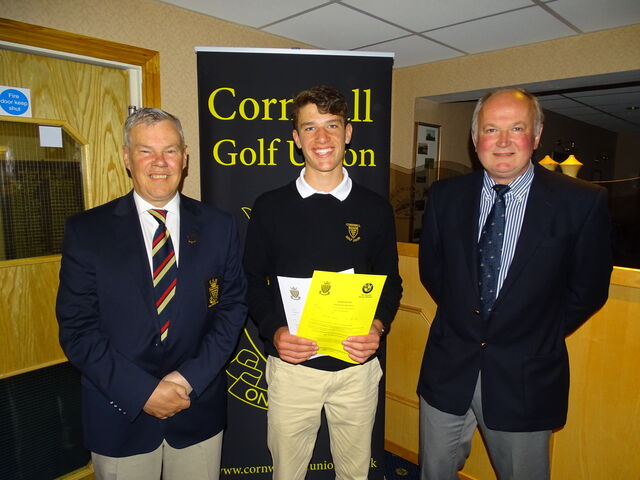 The U21 Championship went to 16 year old Finn Rule (West Cornwall), pictured above, who added to his rising pedigree with rounds of gross 72 and 74 to finish at the top of the pile by two shots from George Leigh (Trevose 74+74). Truro’s Jared Mortimore having made the dash back from Lancashire the previous evening after missing the cut in the Fairhaven Trophy, ended third after rounds of 73 and 75.

As the light faded Mullion GC Captain Glyn Summersall welcomed competitors to the event and expressed how pleased the club was to have staged the competition. CGU President Glyn Rowett thanked Mullion for their hospitality and for the excellent condition the course had been presented in before presenting the prizes

Next up for the CGU is County Week at Newquay GC from 15th May 2016 where Conor Wilson will defend his Amateur Championship title. MacGregor will be aiming to claim that title for the first time himself.

County Week begins with the Royal Cornwall Goblets attracting a field of over 220 golfers from clubs across the Duchy. Spaces are still available in the daily competitions on the Monday, Tuesday and Thursday and anyone interested should contact County Secretary Chris Pountney.