Former County Champions, Matthew Lock & Ian Veale eventually broke down the stubborn resistance of their opposition, Ian Harry & Keith Smallman, both of Whitsand Bay, to claim the Plate Competition of the Open Winter Foursomes at Perranporth, now in its 42nd year of being played.

Both Lock (1999) & Veale (1990) have won the main competition of the Open Winter Foursomes in the past, but this year had to settle for doing battle in the Plate having lost in the first round of the main event.

Giving 14 shots in each round of the 36-hole final it was always going to be difficult for the Tehidy Park pairing, but with wind speeds consistently around 25 mph on a day that was blessed with blue skies, some holes into the wind would prove difficult for Harry & Smallman, who play off handicaps of 16 & 11 respectively.

After 14 holes of the morning round Lock & Veale had built a three-hole lead, but would see that quickly disappear as their opposition won the next three holes. In winning the 18th hole the Tehidy Park ‘boys’ would take lunch with a one-hole lead, but knew they had it all to do when they stepped out for the afternoon round. Lock & Veale got away to a slow start after lunch which included two three-putts in the first three holes, and when Harry & Smallman made a nett birdie on the Par 5, fifth hole they would acquire the lead for the first time in the match.

This served to kick start Lock & Veale into action, as they played the next four holes in one-under par to command a two-hole lead after 27 holes. The Bay pairing threw one last salvo at the Tehidy Park pair in winning the 10th hole, but with the next three holes playing straight into the wind, three pars from the scratch pairing would re-establish a three-hole lead once again. When Lock holed from a distance of six feet on the 15th hole the match was won by a score-line of 4&3 to the joy of the Tehidy Park pairing who were pushed all the way.

Matt Lock tees off on the Par 3, 4th hole in the afternoon. 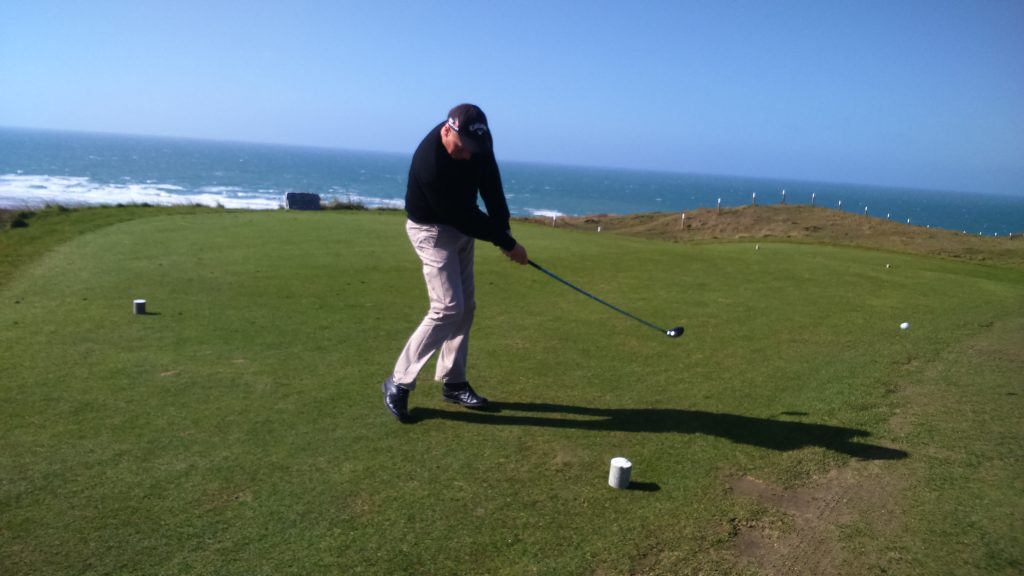