Tehidy Park secure victory over Bowood Park by a score of 9.25 – 3.5 to claim the CTC title for a twelfth time.

A report will follow, but for now we are celebrating at the Clubhouse. Come join us :-)………..and 12 hours later, here it is!!

Tehidy Park Golf Club overcame the spirited challenge of Bowood Park Golf Club to claim the Cornwall Team Championship (CTC) for a twelfth time in their history on a windy, but dry day at Newquay Golf Club.

The morning foursomes got underway with the Tehidy Park pairing of Rob MacGregor and Ian Veale facing Max Stockwell and Jon Rowe, and it was the Bowood Park pair who would signify their intentions in winning the first hole to take an early lead. After twelve holes the match was all square, before MacGregor & Veale showed why they are unbeaten in the current campaign by winning the next three holes, before a half on the Par 3, 16th hole secured the first point of the day.

The lead was soon doubled for Tehidy Park as James Barnard and Martin Langford, despite playing in the fourth foursomes match recorded an emphatic win on the 14th hole against Richard Langham and Neil Childs.

Bowood Park hit back in the second match with their Head Green Keeper, Rob Cook partnered by Simon Hobbs taking the scalps of Matthew Lock and Justin Barnard with a win on the 17th hole.

All attention turned to the match involving the irrepressible pairing of brothers Richard & Peter Simmons against Bowood Parks number one, Josh Greenaway and partner Tom Haley, and when the Simmons’ safely two-putted from length on the 18th green to win by one-hole Tehidy Park had built a 3 – 1 lead, which was added to by Tom Chapman in the 9th man singles match, winning on the 16th hole to maintain his 100% record this season, meaning Tehidy Park needed to win three of the eight singles matches to secure the title.

Once again, MacGregor, who plays off +3 would lead out the Tehidy Park team and faced the challenge of youngster Jon Rowe. Rowe would push MacGregor all the way, but eventually it would be another point for Tehidy Park as MacGregor sealed a 17th hole win to afford him a 100% record in the four matches played through the 2016/17 competition.

With Richard Simmons and Josh Greenaway involved in a titanic battle that would go the distance it was Simon Hobbs of Bowood in match three that chalked up the next singles point, with a comprehensive win over Justin Barnard on the 14th hole.

When Matthew Lock edged Tehidy Park to within one point of the title, as he comfortably defeated the challenge of Cook on the 15th hole all eyes returned to the 18th hole with Simmons, 1 up against Greenaway, and one hand seemingly on the shield. Greenaway had other thoughts as he stole the final hole to leave Simmons disappointed, albeit taking his team now to within half a point of a twelfth victory.

Four singles matches remained, six points being the requisite total, and Tehidy Park led 5.5 – 2.5. Veale stood on the 17th tee, 1 up against Stockwell, as team mate Peter Simmons stood over a four-foot birdie putt on the 15th green. Simmons did what Simmons does, and duly holed the putt as Veale looked on, but wasn’t sure if the holed putt meant a two-hole lead or a match winning three-hole advantage, which would in turn seal the half point required?

As Veale continued he was met by Langford, who was walking in from the 14th green having suffered the same fate as Justin Barnard, with opponent Childs putting in a sterling performance for Bowood (5.5 – 3.5). Veale’s second shot with a three-wood finished just short of the treacherous 17th hole green, before Stockwell hit an errant second shot from the fairway to leave himself in trouble. A bad lie and a mishit escape from Stockwell handed the hole to Veale, and in turn a 2&1 win to get the Tehidy team over the line. After both Peter Simmons and James Barnard signed off with 17th holes wins over Tom Haley and Richard Langham respectively it transpired that Simmons’ birdie putt on the 15th green afforded him the three-hole lead that had in fact sealed the title, which was apt as Simmons had performed the role of Team Captain for the 2016/17 campaign, a fact not lost on Club Captain, David Ryder during his speech as he held the CTC Shield close.

There were further thanks from the Club Captain to the Cornwall Golf Union for the work involved in organising the calendar of events; to Newquay Golf Club for their hospitality in hosting the Final; to Bowood Park for the sporting match that took place during the day, acknowledging that the score-line of 9¼ – 3½ did not reflect how close the match was during the afternoon, and to the ever-present band of caddies and loyal supporters that follow the Tehidy teams in all weathers. 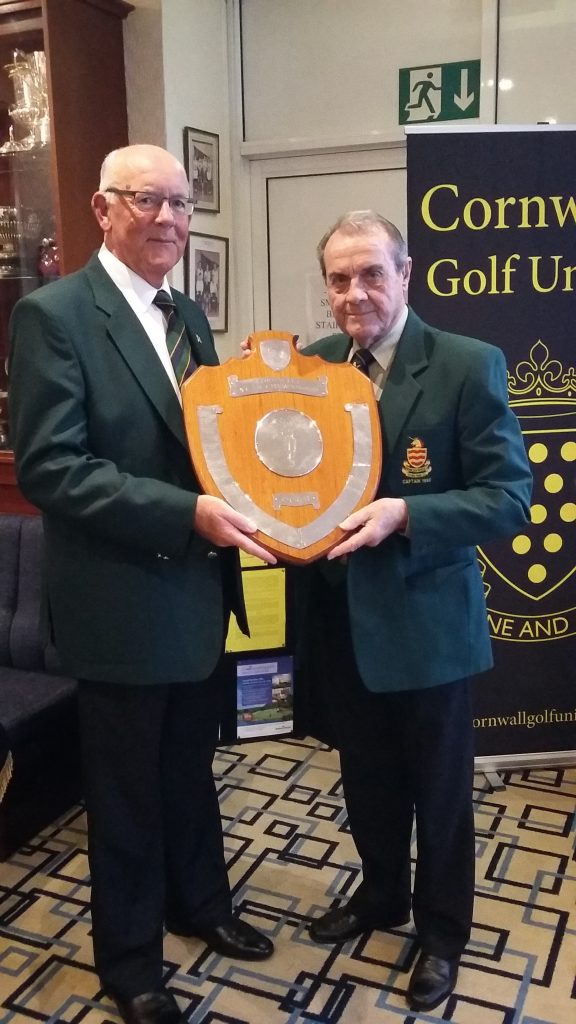 Tehidy Park will now go forward to represent Cornwall in the English Champion Club event in September as the CTC winners, which is to be played in neighbouring County Devon, at East Devon Golf Club.