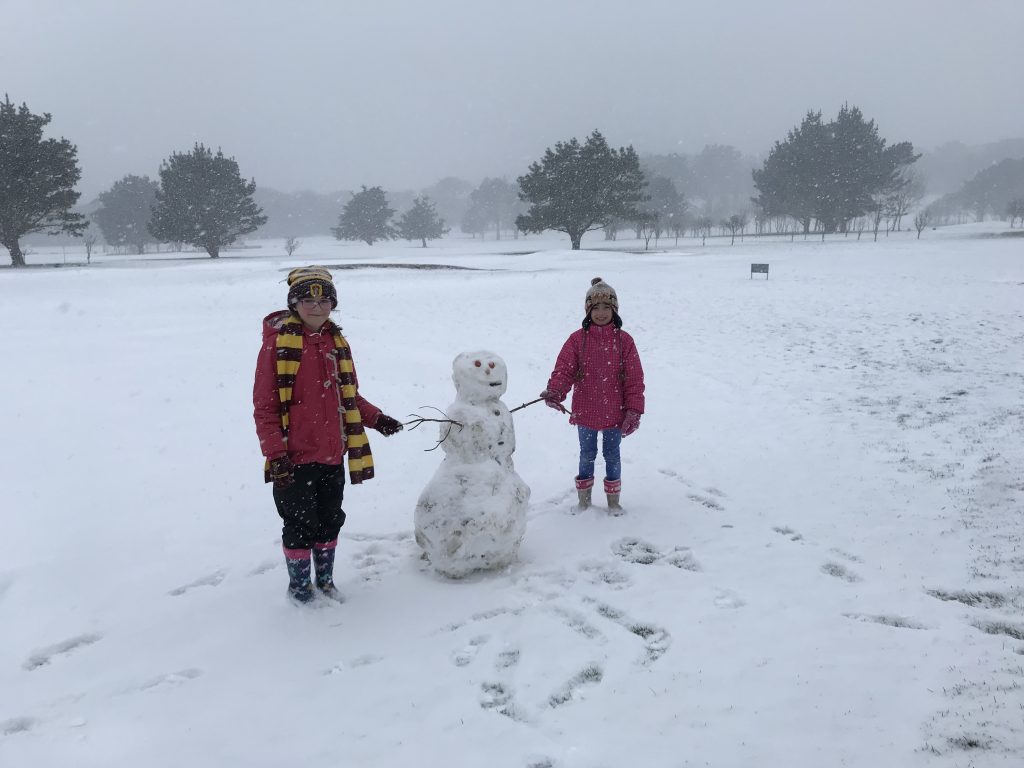 The Captain has now been upgraded from the ‘Rain Man’ to a ‘Snowman’!! What’s next Captain…….. Ice Man ?!
2018 is turning out to be an interesting weather year!!

Having endured a very wet few weeks (feels like months!) we are now in the midst of a drier spell (I mean blizzard as I type!) which has been most welcome in terms of getting the golf course back in shape. After only a week or so of better weather the improvement to the golf course condition has been quite incredible. My thanks go to Andrew & his team for all their hard work, especially when the weather was at its worst. Although there is still some way to go I am confident that Tehidy Park will be in very good order over the next few weeks as the evenings draw out and Spring is upon us!

I would also like to thank all of you, the members, for remaining patient with the number of course closures and the trolley/buggy bans which on occasions have been a necessity. I appreciate this can be quite frustrating but thank you for your cooperation.

The funeral for our Club President, Phil Andrew was a most fitting tribute to a greatly respected man with over 500 people attending the service at Illogan Church followed by a gathering back at the golf club, where it was difficult just to get into the clubhouse due to the huge number of people who came to pay their respects and celebrate Philip’s life. To Les Driver I say ‘well done’… well done on delivering a wonderful eulogy which must have been an extremely difficult thing to do under the circumstances. In addition, the club thanks everyone who has supported Tricia over the past few weeks – I know she has been overwhelmed with the messages of support and the kindness shown by her friends and members here at Tehidy Park.

Paddy Bradley has been a member at Tehidy Park since 1963 following his retirement from playing rugby and last month on the 26th February he celebrated his 85th birthday. Sadly, for Tehidy Park, Paddy has now made the difficult decision to end his membership after 55 years. I can only imagine this was an awfully tough decision to make but Paddy enjoyed and witnessed some great times at Tehidy Park and has many fond memories. During his time as a member, Paddy pretty much did everything – a competitive player (despite being left handed!!) Paddy held a single figure handicap for more years than he was double digits! He represented the teams regularly and played a lot of club and social golf as well as being an active committee member for many years. In 1994 Paddy was honoured to become Club Captain and then President in 2014-2015. Paddy will be greatly missed by his pals and the golf club in general and we wish him well for a happy ‘golf retirement’.

The Senior Section have been busy and are getting ready for the golfing season ahead with the team matches starting on Friday 9th March at Trevose. They are then flat out through until October with 26 matches on the schedule. Having spoken recently with the Seniors Captain, Keith Oliver I know he would like on behalf of the Senior Section to relay their thanks to the endless work from the greens staff, by keeping the course open as much as it’s been possible as they have still managed to play 11 roll-ups that qualify towards the Senior roll-up league. On average they have had 20-30 players turning up for these events and then 40 players for their last competition; they are certainly supporting the club well. Keith also mentioned that many of the section had been making efforts to carry their clubs of which many are in their late seventies – this is greatly appreciated by the club, which benefits from this action.

I was sorry to hear that the Seniors Vice-Captain, Roger Paul has had to stand down because of ill health. I wish Roger well and hope he gets better soon. In the meantime, Sid Marsh has stepped up to the position of Vice-Captain.

The Ladies have got their season underway with their first competition – the Sense of Humour Trophy! This was won by Lyn O’Keefe with 40 points. The Ladies County Championships will be played at Launceston GC this year between the 12-16 April. TPGC are hoping to enter a ladies team for the Western Morning News cup. Last year representatives from the Ladies section were successful in winning the Plate Championship (Katie Sandow) and the Handicap Cup (Amy Butt) but unfortunately neither can play this year so let’s cheer on the ladies that do play and wish them good luck! The Ladies have also asked to extend their gratitude to Andrew and his team for their continued hard work in trying to maintain and improve the golf course.

Andrew Clotworthy is the official nomination of the Cornwall Golf Union to become Vice President of the CGU on Thursday 22nd March and then President in 2020. Congratulations Andrew on this distinguished role, we wish you well and I’m sure you will be a credit to the club during your tenure.

In recent months Mike Mills has taken on the role as the club’s handyman (as well as working for Kathy in the kitchen and bar – therefore if you need a loan Mike’s your man!) The clubhouse and grounds are benefiting from Mike’s hard work and they continue to improve so thanks Mike, please keep up the great work.

The volunteer group continue to be busy and a special thanks must go to Richard Brighton (with the help of Brian James) who helped re-site and ‘fit out’ the old shed which is now an office for our Head Greenkeeper, Andrew Eddison. By moving the shed from the car park, we have opened up at least another two car parking spaces which are much needed. Thanks Richard, your work and that of all the Volunteers is greatly appreciated and is a valuable asset to this club.

The Winter League continues to attract good numbers and although we have had to cancel some fixtures in January & February more dates were added in an attempt to make up for these lost fixtures. The Winter League is a great way to meet new members, socialise and hopefully enjoy some competitive but fun golf so once again my thanks go to Peter Hocking & Paul Phillips for all the hard work they do in running the Winter League.

The Coast & Country tournament has once again attracted a full field of 99 teams – great work Ian on filling the entries – all we need now is the sun to shine in April.

Socially the club has put on a number of great evening entertainment recently and during my year as Captain I am also trying to create & promote some ‘Friday Night at The Park’ band nights. These all have a different food theme and are great value at around £12-15 pp. The latest band to appear was BOO BOO who played on the 23rd February to a packed audience and I have received many comments saying how good they were. The next Friday Night at The Park session will be on the 13th April when the band ‘FlashBack’ return by popular demand. Full details will be on the notice boards very soon. Please come down if you can!

Our Frank Wills Team unfortunately lost their quarter final match against West Cornwall GC on the 21st January at Perranporth – despite some close matches the team were unable to get across the winning line this year. My thanks to all the players and caddies who played some great golf throughout the tournament and fought hard all the way but ultimately, we were beaten by a better team on the day. Good luck to West Cornwall GC who have since qualified for the final.

The Presidents Trophy team were due to travel to Newquay on Sunday 4th, but once again we have been thwarted by the weather! This match has now been rescheduled for Sunday 11th March at Newquay, start times 10 a.m. Let’s hope this will be 3rd time lucky!

n.b. The first of my ‘Captain’s Roll Ups’ will start on Thursday 5th April – details on the main notice board soon.

Our Secretary/Manager and Cornwall Golf Captain, Ian Veale is busy in his time off ensuring that all is in place for the season ahead. He has already held a get-together with his squad during the off season, which has included support from some of the leading Professional’s in the County. 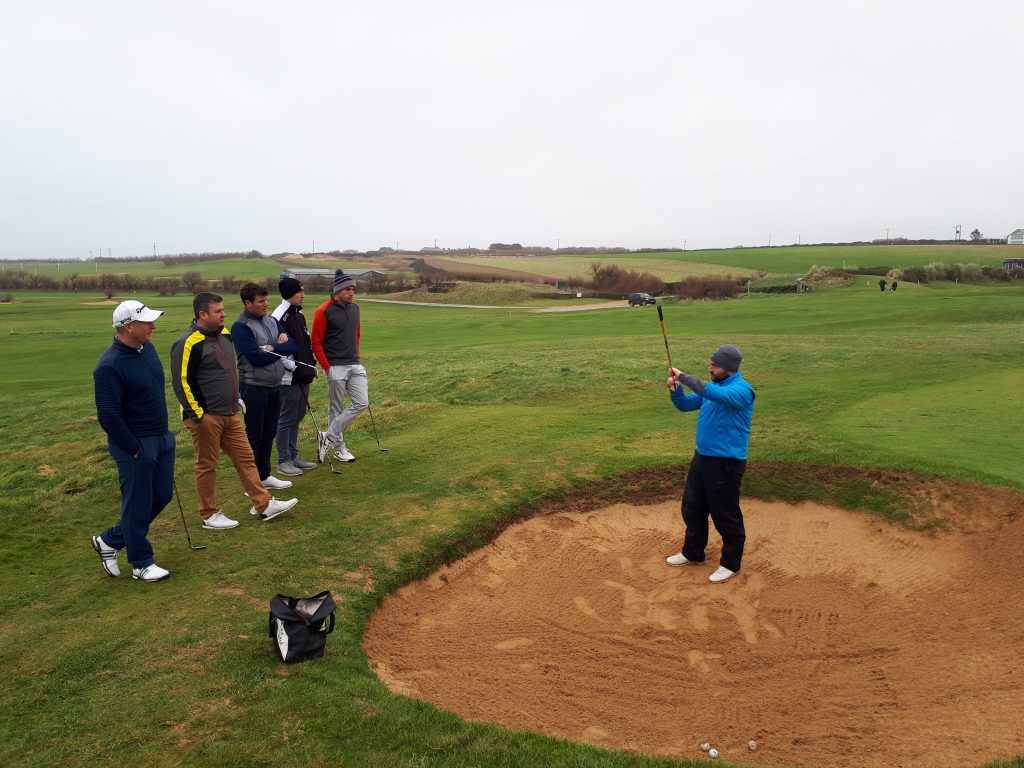 It is somewhat of a coincidence that Ian’s first game in charge of the team will be played at his Home Club, Tehidy Park, as the County will take on the Royal Navy on Saturday 7th April, which is the day before TPGC also put out a Club side for the bi-annual fixture against the Royal Navy.

We wish you and your team well Ian, and I’m sure Ian would welcome support from the membership during the day (the match will consist of 5 foursomes in the morning, and 10 singles matches in the afternoon). For the Club match a sign-up will be affixed to the notice board shortly.

The ever-popular August Golf Week at Tehidy Park. All the competitions and start sheets will be on show in the Clubhouse from Saturday 31st March (11 a.m.) for members to enter. As per usual entries will only be accepted with payment for this extremely busy week.

Thank you One & All and I look forward to seeing you at the Club very soon.